RSE founders Eduard Feuer and William Watkins pioneered Walt Disney's  "Imagineering", the design and engineering division of the Walt Disney Company, before setting up RSE as a separate corporate entity. 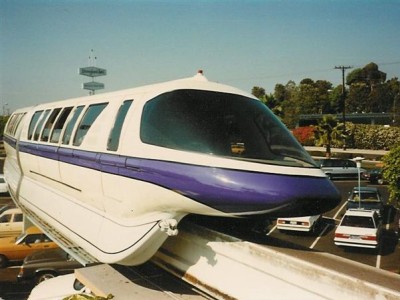 A wonderful thing about working with foreign vendors is of course the opportunity to enjoy the country and its culture. When my family had an opportunity to join me, MBB was most hospitable. Dieter Spiller gave us a tour of the area around Stuttgart including the Ulm Cathedral, and Horst Stockerman hosted our group at several fine restaurants.

Horst's wife took my wife and children to Baden Baden to a wonderful indoor/outdoor swimming pool with a wave machine. On another trip she took my wife to a Carl Spitzwig (“The Bookworm”) art exhibit as well. This trip gave my young children (ages 8 and 10) a wanderlust that continues today, although at the time the highlight of the trip was the elevators at the Sheraton.

The MBB engineers had a respect for Industrial Designers that impressed me. I attribute this to a requirement for art, or ay least an appreciation of art in their training. During the project I traveled with our WDI Monorail Project Engineer, Eduard Feuer, who also trained in Germany—so we had a good rapport.